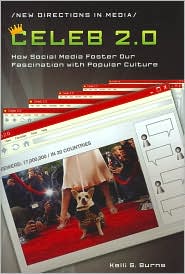 Celeb 2.0: How Social Media Foster Our Fascination with Popular Culture

With Ashton Kutcher’s record-breaking “tweeting” more famous than his films, and Perez Hilton actually getting more attention than Paris, the actress often covered in his blog, the worlds of celebrity celebration and online social networking are pushing the public’s crush on the famous and infamous into overdrive. Celeb 2.0: How Social Media Foster Our Fascination with Popular Culture explores this phenomenon.

Celeb 2.0 looks at how blogs, video sharing sites, user-news sites, social networks, and message boards are fueling America’s already voracious consumption of pop culture. Full of fascinating insights and interviews, the book looks at how celebrities use blogs, Twitter, and other tools, how YouTube and other sites create celebrity, how Web 2.0 shortens the distance between fans and stars, and how the new social media influences news reporting and series television.