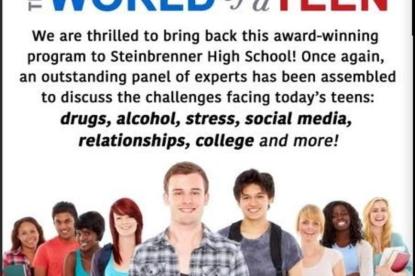 Tonight, I’m part of a panel for Steinbrenner High School’s Sixth Annual “World of a Teen” program, representing the social media world of teens. I’m joining representatives from the FBI, Crisis Center of Tampa Bay, MADD, The Spring (domestic abuse shelter), and others to talk about issues affecting today’s teenagers. I don’t know what questions the parents will pose, but I will outline some of the biggest issues and offer some advice in this post.

What sites are teens using today?

A study from February 2017 found that 79% were using Snapchat followed by Facebook (76%) and Instagram (73%). Much less popular was Twitter (40%), Pinterest (31%), and Tumblr (16%). Video chat platforms, such as Houseparty, also offer teens a way to connect with multiple friends through livestreaming and not leave a trail of the conversation.

How much time are teens spending on social media?

This is a difficult question to answer as social media seem to be always on and teens are always connected. A 2015 Common Sense Media study found that teens average more than 6.5 hours of screen media per day, which is included in their average nine hours of entertainment media per day. Screen time is divided into an average of 39% spent on passive consumption like watching, listening, or reading, 25% spent with interactive content such as games or browsing the web, 26% devoted to communication on social media or video-chatting, and just 3% spent creating original content.

How much of a distraction is social media when trying to complete homework?

What concerns should we have about teens and privacy?

Teens share an incredible amount of information about themselves online. A 2013 study by Pew Research Center and the Berkman Center for Internet Society of teens found that 91% share photos of themselves online, 71% reveal their school, 53% share an email address, and 20% post a phone number. Geolocations are also easily determined by the metadata in photos shared online. An article in Huffington Post offers some tips for parents including teaching your teen to 1) protect their passwords, 2) adjust their privacy settings, 3) not friend strangers or build a relationship with a stranger, and 4) be careful about what is shared online, including comments and photos.

Is my teen addicted to his/her phone/social media?

Social media and phone use are more likely to be a habit, rather than an addiction. Parents might consider using phone apps like Onward or Moment. From these apps, you can not only monitor your own use, but those of others. Other apps to check out include Space and Checky, which simply tells you how many times a day you check your phone. These platforms are designed to keep users hooked. Even Sean Parker, Facebook’s founding president, has noted how the “social-validation feedback loop” provided by Facebook is “exploiting a vulnerability in human psychology.”

Whether a habit or an addiction, research has shown that teens who spent more time in front of a screen are more unhappy than those who spent their time playing sports, interacting in person with friends, or reading. The researchers found the happiest teens used screens for one hour or less and that after that, unhappiness increased with time spent. The researchers discounted those who claim correlation instead of causation, saying that other studies did not find that unhappiness led to more social media use.

Are universities and prospective employers looking at my child’s social media sites?

The simple answer is yes! In 2017, Harvard University rescinded admissions offers to at least 10 students who posted offensive images in a Facebook group chat they thought was private.The posts included memes and images that jokes about minority groups, child abuse, sexual assault, and the Holocaust. What is important to remember is that anything posted can probably be discovered or revealed.

How can I monitor my teen’s online behavior?

Parents can check out monitoring tools like TeenSafe or Bark, which will send alerts about risky behavior or content. In my personal experience, popular platforms like Snapchat are not always included in these tools. I’m also unsure about whether these tools can monitor livestreaming apps like Houseparty.

Should I be concerned about sexting?

Teens are sharing nude photos. Teen girls are feeling pressured or even bullied by teen boys to share photos, and teen boys know that asking will probably result in sharing by girls interested in them and desiring a romantic relationship. Back in 2011, Florida relaxed its sexting laws for first-time offenders. Juveniles with a first time sexting offense will face a $60 fine or eight hours of community service. The second offense becomes a first-degree misdemeanor, which might include fines, probation, or placement in a juvenile detention facility, and the third offense is considered a felony. Once an adult, the penalties are very serious and, depending on the nature of the crime, could result in a sentence of up to 30 years in prison.

What else should I know about what my teen is doing?

Secondly, your teen probably has a rinsta (real Instagram profile) and a finsta (“fake” Instagram profile for close friends only), or the equivalent on another social media platform. So while a parent might monitor one profile, objectionable content might be posted on the other.

Teens might also be storing content like photos and videos in a storage app like Vaulty. On the phone, the app looks like a calculator or another common app. Some of these storage apps have two levels of passwords, where the first one will get you to a limited storage vault and another password is needed to have full access.

So as parents, how can we encourage our teens to make better decisions online?

An article on Today.com offers the following suggestions:

1) Get to know the sites your teens are using, whether Snapchat or Instagram. Download them and set up profiles for yourself.

2) Model good behavior. If you don’t want your teen to be addicted to social media, make sure you aren’t addicted yourself.

3) Talk to teens about current events, like the Harvard admissions example or teens who have been bullied on social media and as a result, died by suicide.

5) Encourage your teen to ask the three W’s before posting: Who is the audience? What is the message and is it in line with your values? And why are you posting?

6) Monitor the mood of your teen. Does social media usage seem to be tied to a change of mood?

7) Consider using a monitoring app or at the very least, discuss acceptable use and expectations.

It’s not easy being a parent! Sometimes we find ourselves saying “back in our day…” as we reminisce about simpler times. It’s not going to get any easier.

CNN’s #Being13: Inside the Secret World of Teens

Glow Kids: How Screen Addiction Is Hijacking Our Kids